Vietnam won’t be pushed around by China

(BGF)  –  “Vietnam is no match for China when it comes to military power and never will be”, as H.D.S Greenway comments on Vietnam in its dispute over China’s bringing in a giant oil rig off the Paracel Islands that both claim in the South China Sea. However, as he said, “Vietnam could make further Chinese attempts to control all of the South China Sea expensive and dangerous.”

In the Boston Globe, Greenway shared his thought and own eye-witnessed story about Vietnamese spirit in war 40 years ago and even made a in-depth research into Vietnam history and its victories against Chinese invasions.

Vietnam won’t be pushed around by China A Vietnamese Coast Guard officer took a picture of a China Coast Guard ship moving toward his vessel, which is near the site of a Chinese drilling oil rig being installed in disputed water. (Photo Credit: AFP)

Vietnam may prove harder to push around than some of China’s other maritime neighbors in contested waters. Vietnamese and Chinese ships recently rammed each other and fired water cannons to contest China’s bringing in a giant oil rig off the barren sandspits called the Paracel Archipelago that both claim in the South China Sea. It was not the first such confrontation.

Forty years ago, when there was still a South Vietnam, I watched South Vietnamese war ships holed by gunfire limp home into the port of Danang. They had not been fighting their mortal enemy, North Vietnam. They had clashed with Chinese forces off those same disputed Paracel islands that lie about equidistant from the Chinese and Vietnamese coasts. China made a big fuss over the confrontation at the time, saying its forces had protected the motherland. South Vietnam scored a propaganda victory over Hanoi by calling upon all Vietnamese, of whatever political persuasion, to denounce the Chinese occupation of sacred Vietnamese soil.

The following year, as North Vietnamese forces were closing in on Saigon and South Vietnam was in its death throes, the North Vietnamese attacked and displaced a small South Vietnamese garrison on the Spratly Islands further south which were, and are today, also claimed by China as well as Vietnam, the Philippines, and even tiny Brunei. The significance was that, even though the war between the two Vietnams was still raging, Hanoi made the decision to steal a march on China, its vital ally, just to make sure that, once the war was over, a Vietnamese garrison remained on the remote islands Vietnam claimed.

In 1979 China actually attacked Vietnam along its northern border, not over islands in the South China Sea, but in order to punish Vietnam for its invasion of Cambodia in order to oust the loathsome Khmer Rouge regime, a China ally. In that encounter the Chinese army received a bloody nose from the more battle-hardened Vietnamese.

(BGF) – Vietnam government was considering taking legal action against China, the Prime Minister Nguyen Tan Dung said in comments to Reuters.The White House also expressed its support the use of arbitration or other international legal mechanisms in order to resolve the dispute, as Roberta Rampton and Jeff Mason from Reuters reported. (Reuters) – The White House said on Thursday it would support the use of legal action by Vietnam against China to resolve a dispute after the deployment of a Chinese oil rig to disputed waters in the South China Sea.

U.S. support for such a move would likely upset Beijing.

“The United States has a national interest in maintenance of peace and stability; respect for international law; unimpeded lawful commerce; and freedom of navigation and over flight in the South China Sea,” White House spokesman Patrick Ventrell said in response to questions about the prime minister’s remarks.

“The United States supports the use of diplomatic and other peaceful means to manage and resolve disagreements, including the use of arbitration or other international legal mechanisms.”

Chinese Military Said to Be Massing Near the Vietnam Border

(BGF) – Joshua Philipp from the Epoch Times reported that China’s military in full combat gear were seen heading to the Vietnamese border on May 16 and 17, with photographs taken by by residents near the border. One Chinese netizen reckoned that “Conflict between China and Vietnam is imminent.”

Chinese Military Said to Be Massing Near the Vietnam Border Troops, tanks, trucks, artillery, and armored personnel carriers of China’s military were seen heading to the Vietnamese border on May 16 and 17, according to photographs taken by by residents near the border.

Chinese netizens have been posting photographs of the large movement of the People’s Liberation Army, many of them showing Chinese troops in full combat gear heading to the local train station in Chongzuo, along with military vehicles.

One netizen said the Chinese military was taking the train from the Chongzuo station to Pingxiang City, which shares a 60-mile border with Vietnam. The netizen said that the Huu Nghi Border Gate to Vietnam is also now closed.

One of the photos, taken from inside a passenger train, shows the Chinese military preparing artillery for transport on a train track. Others show Chinese troops and military vehicles traveling along dirt roads.

Another photograph shows troops walking under the red-colored entrance to the Longzhou International Building Materials Market, on Provincial Road in the city of Chongzuo.

A reverse image search of each of the photographs using Google indicated that the photographs had appeared on the Internet only recently. Most were indexed by Google on Saturday.

Collectively, the images and eyewitness reports from the ground show what Taiwanese media are calling an “endless stream” of Chinese troops.

( BGF) – As Reuters reported, U.S. official commented that China’s “provocative” activities in maritime disputes with its neighbors are “straining the U.S. – China relationship” as it only encourages the Asian countries to seek greater U.S. involvement in regional diplomatic, economic and military affairs.

The U.S. Vice President Joe Biden and other top U.S. officials also told visiting General Fang Fenghui, chief of general staff in China’s army, that Beijing’s behavior in the maritime disputes was “dangerous and provocative” and must stop. 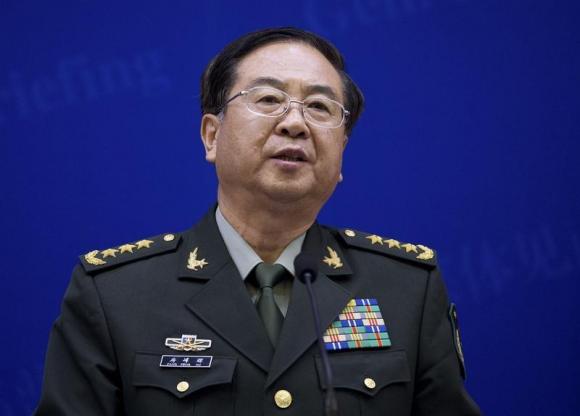 (Reuters) – China’s “provocative” actions in maritime disputes with its neighbors are straining ties with the United States, raising questions over how the world’s two biggest economies can work together, a senior U.S. official said.

The strong comments from Washington on Thursday come after deadly anti-China riots broke out in Vietnam in response to China towing an oil rig into a part of the South China Sea claimed by both Hanoi and Beijing.

“This is raising some fundamental questions for us about China’s long-term strategic intentions,” the U.S. official told Reuters, speaking on condition of anonymity. He said Beijing’s move appeared to fit a “pattern” of advancing territorial claims through coercion and intimidation.

“China’s activities are straining the U.S.-China relationship because it raises questions about our ability to partner together in Asia or even bilaterally.”

The Vietnamese government says one person was killed in the anti-China violence on Tuesday and Wednesday, but a doctor at a hospital near one area of rioting said he had seen 21 dead bodies and that at least 100 people were wounded.

An eyewitness to fighting between Chinese and Vietnamese workers in an industrial zone in the same area said she had seen at least 13 bodies.

There were no immediate reports on Friday of further violence.

(BGF)  – The Bloomberg News shared a story of Vietnamese  Lt. Colonel Phan Duy Cuong about his combat with Chinese vessels in waters near islands claimed by both nations in the South China Sea. It also calls the situation as “playing a daily game of cat and mouse” in rough seas as China shields the rig with its vessels. From his Vietnamese Coast Guard boat at night, Lt. Colonel Phan Duy Cuong can see the yellow lights of an oil rig 10 nautical miles away. Owned by a Chinese company, it sits in waters near islands claimed by both nations in the South China Sea.

Dozens of ships clutter the area, playing a daily game of cat and mouse in rough seas as China shields the rig with its vessels. At stake is the resource-rich waters around the contested Paracel Islands, in a dispute that has soured ties between the two Communist nations as China steps up its territorial assertions in the region.

An officer on Coast Guard vessel No. 8003, Cuong said his boat motored to 6.5 nautical miles from the rig today before being flanked and chased off by two Chinese coast guard ships that came as close as 400 meters (1,312 feet), blasting horns and playing recordings stating China’s sovereignty over the area. Four times the Chinese boats cut in front of the Vietnamese ship, he said.

Cuong said his vessel, which has been at sea since May 5 with 50 crew, got to 6 nautical miles yesterday from the rig before being forced back, and he saw a Vietnamese ship rammed. Crew members in the cabin relayed the boat’s position to superiors onshore as they pulled back.