Paul Nemitz, Principal Adviser, Directorate-General for Justice and Consumers, European Commission, has recently published his work highlighting the effect of AI on constitutional democracy in modern societies and calls for a new culture of incorporating the principles of democracy, rule of law, and human rights by design in AI and a three-level technological impact assessment for new technologies like AI. In Nemitz’s recent article “Constitutional democracy and technology in the age of artificial intelligence”, he pointed out four core factors of digital’s power concentration which are threats to both democracy and functioning markets in modern societies, which are:

Currently, the pervasiveness of few tech giants such as Google, Facebook, Microsoft, etc., who are quietly shaping our experience with the Internet and digital technologies like AI, has been raising a big question whether constitutional democracy is maintained. Not only have mega corporations affected all areas of society relevant to opinion building in democracy: governments, legislators, civil society, political parties, schools and education, journalism and its education and—most importantly—science and research, they also have thrived on a culture of lawlessness and irresponsibility. Therefore, it is time to move on to the crucial question for AI in democracy— “which of the challenges of AI can be safely and with good conscience left to ethics, and which challenges of AI need to be addressed by rules which are enforceable and based on democratic process, thus laws.”

To deal with these challenges, codes of ethics and laws concerning fundamental rights of individuals are needed. AI is currently at its dawn, it could bring about huge benefits, and it is up to us to shape its development in a way that can serve human interests. “In the world of technological dreams for domination and populist ambition to undermine democracy, we need to strengthen democracy by giving back to the law the noble function which it has in constitutional democracy: to express the will of the people in a form obligatory for everyone and able to be brought into reality, even against resistance and non-compliance, by the use of public and private enforcement powers.” writes Nemitz.

With the purpose of ensuring AI’s future, the Michael Dukakis Institute has launched the AIWS Initiative, including the AIWS 7-Layer Model for ethical AI and concepts for the design of AI-Government, which has received the support of Paul Nemitz. 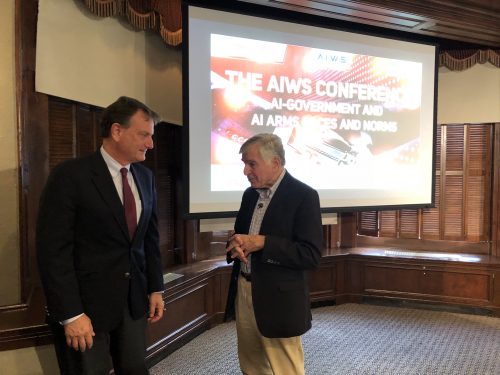