This year has been a remarkable journey for the Boston Global Forum (BGF) and the Michael Dukakis Institute (MDI). 2018 is a year of expansion and advancement with achievements in progress of fulfilling our mission. Taking steps and steps closer to our ultimate goal, these are the milestones we have reached so far this year:

Mr. Nguyen Anh Tuan – Director of BGF & MDI participated in conference of the World Leadership Alliance Conference (G7WLA-Club de Madrid) – the world´s largest forum of democratically elected former presidents and prime ministers of G7 and OECD countries in San Francisco from February 25-26, 2018. With the theme of “Next Generation Democracy”, Mr. Nguyen Anh Tuan presented the AIWS Initiative with 7-Layer Model as the foundation to build Next Generation Democracy and called for a joint effort from Club de Madrid and tech giants Google, Facebook, Apple, Microsoft, IBM, Amazon, and scholars from Harvard, MIT, Stanford, Berkeley, Oxford, and Cambridge. This appeal was responded by the collaboration between the BGF and WLA-Club de Madrid with the mission of developing better models for humanity in the era of artificial intelligence. 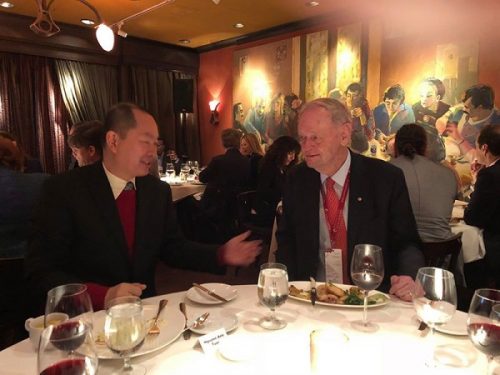 On April 2, 2018, Michael Dukakis Institute (MDI) and Boston Global Forum (BGF) hosted a Roundtable in Tokyo with the participation of top AI researchers and thinkers in Japan “land of rising sun”: Dr. Kazuo Yano – Chief of Hitachi’s R&D Group and the pioneer of AI technology in Japan, Professor Koichi Hamada, special adviser to Japan’s Prime Minister Shinzo Abe, who helped build the “Abenomics” doctrine, etc. The AIWS group in Japan was led by talented Kazuo Yano since this roundtable. With this important event, AIWS thoughts and pathways have spread strongly in the land of cherry blossoms. Guests and speakers took memorial photos in the conference

On April 25, 2018, at the BGF-G7 Summit Initiative Conference in Boston, the AIWS 7-Layer Model was officially published and presented to Canada government, the host country of G7 Summit 2018 as the initiative for the G7 Conference. In this special event, Walter Langelaar – Co-founder of SAM, the world’s first AI Politician accompanied with AIWS, presented SAM as an application layer of the 7-Layer Model of the AIWS. A New York financial analysis team that created the financial and investment analysis robot used by Dow Jones, also attended the Conference and co-built the 7th layer of the AIWS. 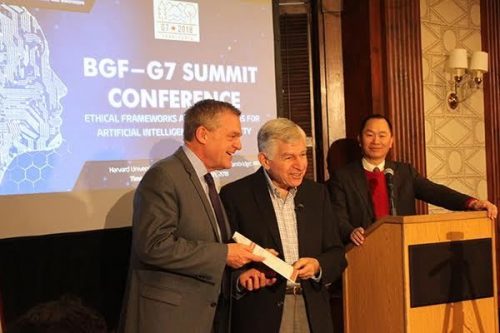 Notably in this event, for the first time, BGF&MDI honored the World Leader in AI World Society Award to Secretary General of OECD Angel Gurría. The OECD Secretary-General sent a video of the acceptance speech, he praised the AIWS initiative and hoped to promote the cooperation between OECD governments for the global consensus in AI development. On June 25, 2018, at Harvard University, BGF&MDI published the concepts of AI-Government, the 5th and 6th application layers of the AIWS 7-Layer Model. On July 23, 2018, MDI developed Vietnam’s breakthrough strategy for AI Economy. The strategy was built by Mr. Nguyen Anh Tuan, Director of BGF&MDI and Professor Jason Furman – Harvard University, Former Chairman of the Council of Economic Advisers of President Barack Obama according to the proposal of the Government of Vietnam. On July 25, 2018 at Vietnam CEO Summit 2018 with the theme of “Age of Artificial Intelligence and Vietnamese Enterprises”, Mr. Nguyen Anh Tuan and Professor Jason Furman presented about the AIWS and Vietnam’s breakthrough strategy for AI Economy to leaders of largest enterprises in Vietnam. On September 20, 2019, the first AIWS Conference was organized by BGF at Harvard with the presence of influential professors from Harvard University, MIT, Tufts, Brown…, focusing on building the core principle for the AI-Government. 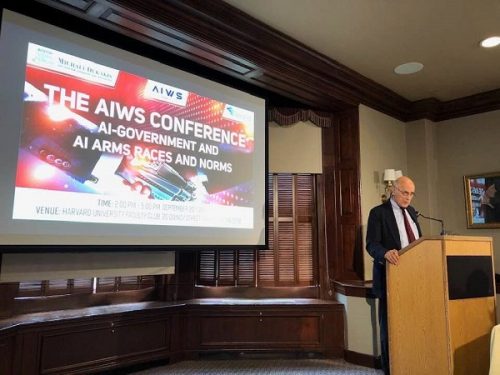 Professor Joseph Nye, the father of “soft power” to speak at the AIWS Conference

In September and October 2018, the influences of AIWS Initiative spread and conquered the elite in Northern Europe through a series of World Leadership Alliance (WLA-CdM) Conferences.

On September 28-29, 2018, Mr. Nguyen Anh Tuan attended the Conference in Riga, On October 17, 2018 he participated the policy dialogue of WLA-CdM in Lisbon. Through these events, MDI has attracted many politicians’ participations in building the AIWS, namely former Finnish President, former Prime Minister of Norway, former EU President. 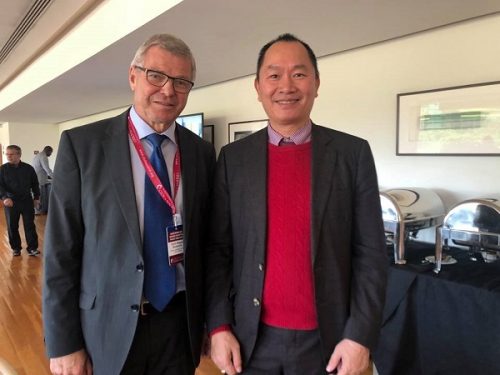 On October 22, 2018, Mr. Nguyen Anh Tuan delivered a keynote lecture on the concepts of AIWS and AI-Government in the 13th International Symposium “Intelligent Systems-2018” organized by three major universities in Russia at Saint Petersburg.

On October 23, 2018, Mr. Nguyen Anh Tuan was a panelist in the Symposium and had discussions with the Ministers of Information and Communications of governments in the EU community in Brussels. President Michael Dukakis was honorably chosen to deliver the opening remarks at the AI World Conference and Expo. At this event, on December 4, 2018, President Eliot Weinman of the AI World Conference and Expo announced a strategic partnership with BGF&MDI to organize the AI-Government Conference from June 24-26, 2019 at Washington DC. Mr. Eliot Weinman, Head of the Event Organizing Committee, was also pleased to announce the first Government AIWS Ethics and Practices Index developed by MDI.

MDI Director – Mr. Nguyen Anh Tuan is the lead speaker in the panel on the AI-Government at the event. With AIWS Index and AI-Government, MDI has gradually affirmed its pioneering position. 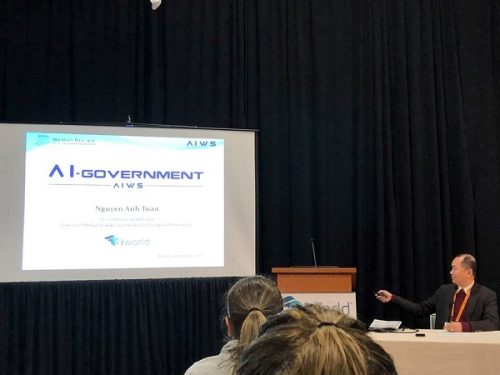 Mr. Nguyen Anh Tuan presented the basic principles of the AI-Government at the AI World Conference and Expo in Boston, December 4, 2018

On December 12, BGF&MDI held the Global Cybersecurity Day 2018. In this event, MDI awarded President Sauli Niinistö – President of the Republic of Finland as the World Leader for Peace and Cybersecurity for his contributions to building a Smart Government to effectively serve his citizens. President Niinistö expressed his honor to receive this award and emphasized that countries should make every effort to increase citizens’ awareness in all areas of society and strengthen cooperation among nations, as well as rules for international borders. Notably, Rt. Hon. Liam Byrne MP, Member of Parliament for Birmingham, Hodge Hill, Shadow Digital Minister, Chair of the All-Party Parliamentary Group on Inclusive Growth, delivered the first AI World Society Distinguished Lecture at the Global Cybersecurity Day. In the speech, he focused on the changes occurred in our society the last decade, and how it affected the society and market along with the risks and challenges. In conclusion, he called for the join force of lawmakers and change makers to reshape those constraints. On December 16, 2018, leaders of MDI discussed with leaders and scholars from Dalat University (DLU-Vietnam) to support the establishment of the AI World Society House and AI World Society Innovation Program at Dalat University. The two programs are considered “nucleus” for DLU to become a pioneer in research, teaching and application of AI in Vietnam. In this collaborative support mechanism, DLU will operate and manage the activities of the AIWS House and MDI will advise and supervise to ensure quality, efficiency and achievement of goals. In the afternoon of December 16, Mr. Nguyen Anh Tuan, Director of BGF&MDI appeared on the Talk show “Leadership and Innovative Spirit in the era of Artificial Intelligence” held by Dalat University, Vietnam. The anchor was Journalist Ta Bich Loan, Director of Vietnam Televisions VTV3 Channel. Mr. Nguyen Anh discussed about the spirit of leadership and innovation and the importance of these qualities in the era of Artificial Intelligence. After a year since the AIWS Initiative was born, AIWS has spread its significant influence to the world’s leading science and technology centers as well as political and cultural centers. From a group of scholars at Harvard University and MIT, AIWS has gathered great minds, progressive ideas, and new human thoughts to identify both promising and challenging issues that have been questioned by the development of AI technology. From a cross-century vision, stemming from a noble mission, AIWS has become a beautiful ideal, a great desire for the better future of mankind.