Dear chairs of the Boston Global Forum, Nguyễn Anh Tuấn, dear fellow councils general and distinguished member of the audience, as the french consul general in Boston, let me express my deep appreciation for the initiative taken by the Boston Global Forum and the Dukakis Institute for leadership and innovation to focus on the dreadful war in Ukraine and award president Zelensky, an inspiring leader for Europe and the world, its leadership prize for peace and security. As you mentioned, professor [Zaneta] Ozolina, France is now holding the chair of the EU council and as such can speak for the EU and condemn the military invasion launched by Russia on Ukraine in the strongest possible terms. This invasion constitutes a brutal violation of international law, and we demand that Russia immediately cease its military operation, and that a total unconditional ceasefire is established. As it was said earlier, this is an unprecedented situation. It’s a turning point in the history of Europe and our countries. It will have profound lasting consequences for the geopolitics of our continent and beyond, and we will respond. This crisis seriously calls into question the international order. Ukraine brave resistance has inspired us all, and France and its partners are not at war with Russia, but we support free and sovereign Ukraine to respond and create the conditions so that Russia realizes the inanity of its war and negotiate.

This crisis has seen the EU emerge as a major foreign policy actor, both in terms of sanctions financial support and defense capabilities. The European union has never responded to a crisis with such strength and agility. Within 48 hours, the 27 EU member states adopted an extensive package of sanctions against Russia, a systemic actor and permanent member of the UN Security Council. Since then, we have constantly increased these sanctions with major decisions taken by all EU member states on SWIFT, North Stream 2, and against Vladimir Putin himself. Our sanctions are currently targeting 70 percent of Russia’s banking system including the Russian central bank with a ban on transaction involving the management of its reserves and assets with regards to defense. For the first time the 27 member states financed a European legal defensive weapons budget, worth a total of 1.5 billion euros for Ukraine. Sweden has called into question its principle of neutrality. Germany has increased its defense budget, and Denmark is preparing a referendum on this issue. The strategic compass has been approved, and following the Versailles summit on 10th and 11th March, the commission is expected to propose significant reinvestment in defense industries. And with a view to European energy independence, the european union is also committed to provide support to the Ukrainian government for its immediate needs. And once the Russian onslaught has seized for the reconstruction of a democratic Ukraine, the EU has now set up an international fund to help finance the reconstruction of Ukraine, and we look forward to the May 5th donors conference to provide concrete resources.

Finally, let us think of the millions of Ukrainian families impacted by Russia’s war. As of March 22nd, 10 million Ukrainians have had to leave their homes. 3.4 million are already in the European union. Under the French presidency of the EU, we have jointly decided to activate the temporary protection directive for the first time in our history. It will allow all Ukrainians and Ukrainian residents who are fleeing their country to be welcomed on the territories of the 27 member states, and to benefit from immediate protection, which can now be renewed to last up to three years. Ladies and gentlemen, I hope I have demonstrated to you how committed the EU is in this crisis. We will be on Ukraine’s side, and we support president Zelensky’s ambitious vision for Ukraine, modern, prosperous, forward-looking, and part of our European family. Thank you very much. 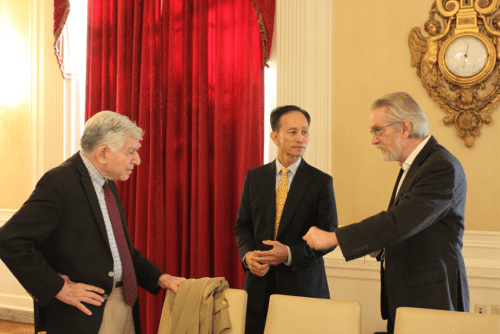