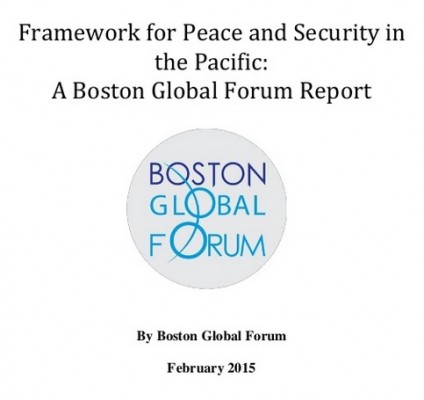 Each year the Boston Global Forum adopts a single issue for detailed discussion, debate, analysis and recommendations. The 2014, “Framework for Peace and Security in the Pacific,” strives to reduce mounting tensions among Asian nations over disputed South and East China Sea territories, such as Spratly, Paracel and Senkaku Islands; shipping lanes, fishing rights, and mineral resources by providing clear mechanisms to avoid armed conflict.

As part of the yearlong effort, Boston Global Forum (BGF) held online international conferences and symposia at Harvard University focusing on the tensions between China, the Philippines, Vietnam and Japan over claims in the South and East China seas. Massachusetts Governor Michael S. Dukakis, BGF chairman and co-founder, and Joseph S. Nye, Jr., a member of the BGF Board of Thinkers and Harvard University Distinguished Service Professor moderated the discussions among over two dozen leading elected officials, scholars and policy analysts from around the world.

The “Framework,” including a complete least of speakers, is available at (https://www.bostonglobalforum.org/wp-content/uploads/BGF-Report-on-Framework-for-Peace-and-Security.pdf ). and cites flash points over the recent past that have involved sparring between China’s military air and sea defenses and other nations over fishing rights, economic zones, oil resources and other matters. One such incident resulted in a near collision between Chinese and American military aircraft. Photo: Governor Michael Dukakis led a conference about building a Framework for Peace and Security in the Pacific in 2014.

According to the report, “For their part, some of China’s neighbors, including Japan, Indonesia, and Vietnam, have bolstered their defense capacity. Vietnam, for example, has acquired two Russian submarines capable of launching torpedoes and anti-ship missiles that could destroy a Chinese oil rig were it to deploy in Vietnamese waters.” .

The “Framework for Peace and Security” urges reliance on international law to resolve conflict, regional interdependence with strong economic and trade relations among the nations of the Pacific, and multilateralism, in which all nations participate in negotiations over critical issues. In the near term, the BGF report also urged a strong US presence in the region as a means of promoting peace, security and prosperity.

Throughout 2015 the Boston Global Forum will focus on the mounting threats of cyber-warfare and cyber-terrorism.