Cambridge, MA (Oct 17, 2015): Boston Global Forum hosted an international conference on October 16 at Harvard Faculty Club to seek for solution initiatives for armed conflicts potential in the South China Sea, given the large-scale land reclamation and militarization possibility from China in its occupied islands in the Spratlys. 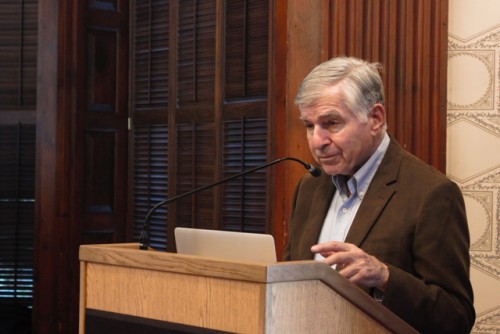 The conference attracts participation and discussion of several notable experts in international affair and foreign policy, including:

Most updated information about China’s land reclamation activities was provided and its underlying objectives for these actions are discussed. All discussants expressed a growing concern on the possibility of militarization and condemened China’s growing assertion in South China Sea, including the reclamation of rocks and islands in the disputed Spratly Islands. Apparently, Chinese moves attempted to change the status quo in the South China Sea, which is in violation of the United Nations’ Clause of Seas as well as the Declaration of Conduct signed among China and ASEAN countries, threatened the peace, stability and maritime security in the Pacific region. 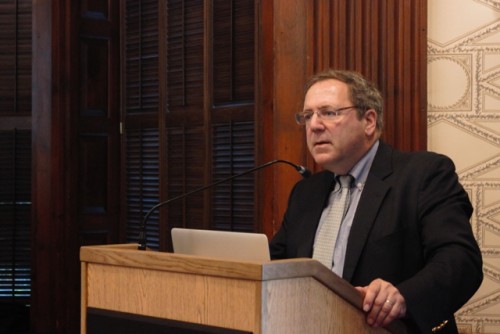 David Sanger, Chief Washington correspondent of the New York Times, made the first keynote speech in the conference.

David Sanger, Chief Washington correspondent of the New York Times, said “The biggest question is can you persuade Chinese that most of what they are doing now is taking the other regional players and driving them into American?”

Bill Hayton, the journalist of BBC World News TV, also shared his thought: “The significance of China’s island building lies less in what it has done so far than in what it might be about to do”. “In my view, concern should focus on three areas of sea: the Vanguard Bank, off the Vietnamese coast; the Reed Bank, off the Philippines coast; and around the Luconia Shoals and James Shoal, off the Malaysian coast. All three have significant oil and gas potential. That’s not to say that hydrocarbons are the sole reason for China’s island building. There are many motivations – reflecting China’s many security interests and its many internal lobbies.” he added. “I don’t believe it [China’s claim and physical presence over the Spratlys] will end until China occupies every land feature in the sea and controls the sea spaces in between.”, Hayton stressed his thought. Bill Hayton, TV journalist of BBC World News TV and author of “The South China Sea: The Struggle for Power in Asia” (Yale University Press, 2014) join the conference from London.

Besides of providing updates on recent developments of islands done by China in Spratlys, participants also discussed resolutions to maintain peace, stability and maritime security in South China Sea. All stressed that no claimant is allowed to pursue measures of violence or militarization to assert their claims on disputed islands. Bonnie Glaser, the CSIS’s senior adviser for Asia, added a new thought: “… I think demilitarization in South China Sea is not achievable. The question is – what is achievable? ….I think maybe it is potential to have militarization, so the claimants could agree, for example, on weapon system and capabilities that would not be deployed on land features in South China Sea”. Participants also emphasized the importance of US presence in the region in the context that regional organizations are not powerful enough to enforce the international law. However, the United States — cannot do it alone, but would play a significant role as a safeguard to prevent any escalation of tension into conflict.

“Changing China’s actions really require a more effective strategy. In my view, the US cannot do this alone. The other claimants along with neighbors who have interest in the South China Sea should work together to shape the Chinese decision making. For example, willing members of ASEAN could draft a Code of Conduct and work to convince others members to sign it. And even it is unsuccessful, the process would insert pressure on China to engage more seriously in COC negotiation”, Glaser suggested. 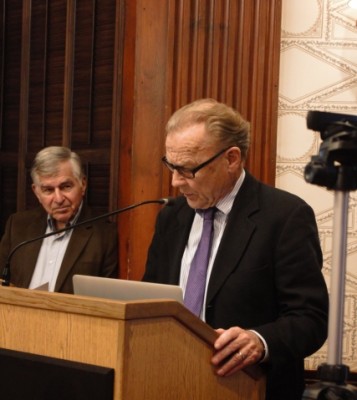 Professor Thomas Patterson,  Co-founder and Member of BGF Board of Directors, Bradlee Professor of Government and the Press, Harvard Kennedy School briefed out the BGF’s report “Chinese Disputes in the South China Sea: Risks and Solutions for the Asia-Pacific.”

Nevertheless, in a longer term, it is essential to have a new regional framework to ensure and supervise the enforcement of international laws. Professor Thomas Patterson, BGF’s Co-founder, briefed out the BGF’s report on disputes in the South China Sea and announced the report’s suggestion of a more strengthened alliance network in Asia in order to halt China’s actions. Such alliance would be called the Pacific Security Alliance (PSA). The PSA should include United States, Japan, Australia, South Korea, Vietnam, Philippines, and others who wish to join. China can also be invited if it is ready to prove with its speech and actions a commitment to international norms, standards, and regulations to keep peace and security in the Pacific region. Governor Dukakis, chairman of BGF, reiterated in his closing remarks that “the mission of the PSA is to lead joint patrols in the South China Sea, if and to the extent that the Permanent Court of Arbitration does not solve the dispute. Joint international patrols will be crucial to operationalizing peace and security in the Pacific.”

More other views are shared by several notable experts.

Brent Colburn, Fellow of Institute of Politics, Harvard  University; Former Assistant to the Secretary of Defense for Public Affairs: