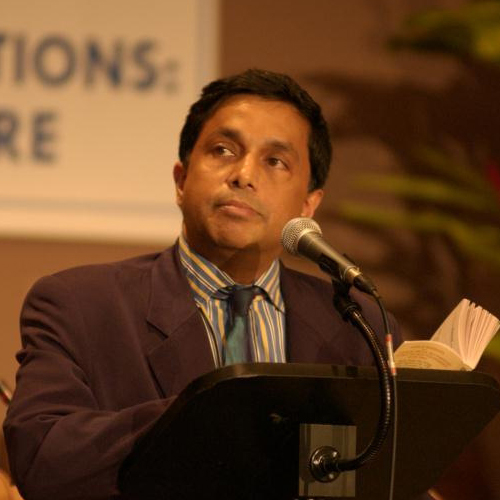 Ramu Damodaran joined the United Nations Department of Global Communications in 1996; his responsibilities in the Department have included oversight of relationships with civil society, the creative community and celebrity advocates, publications (including as Chief Editor of the UN Chronicle), the Dag Hammarskjöld Library and the United Nations Academic Impact, which he was asked by Secretary-General Ban Ki-moon to devise and lead. He has also been secretary of the United Nations General Assembly’s Committee on Information since 2011. He completed his career with the United Nations in May 2021.

His earlier Secretariat assignments included the Departments of Special Political Questions and Peacekeeping as well as speechwriting in the Executive Office of the Secretary-General. He was spokesman for the “Durban Review” human rights conference in 2009 and has fulfilled a range of speaking engagements on behalf of the Organization over his career.

As a member of the Indian Foreign Service, where he was promoted to the rank of ambassador, he served as executive assistant to the Prime Minister of India between 1991 and 1994 and earlier in the Ministries of External Affairs, Home Affairs, Defence, Planning and Human Resource Development.

Before joining government service in India, he worked as a television news anchor, radio producer and host, and university correspondent for All India Radio and the Hindustan Times Evening News. His radio feature on university students in Delhi won the Asia-Pacific Broadcasting Union award. Ramu also served as President of the United Nations Staff Recreation Council.