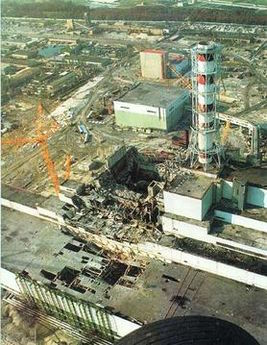 The Chernobyl nuclear plant after the explosion and meltdown there in 1986.

The Ukrainian government says that the  nuclear wasteland around the site of the Chernobyl  nuclear power-plant disaster could be turned into one of the world’s largest solar farms. The Guardian says officials say that the plant could generate nearly a third of the electricity that the nuclear facility generated before the explosion and meltdown there in 1986.

The news service reported: “In a presentation sent to major banks and seen by the Guardian, 6,000 hectares of ‘idle’ land in Chernobyl’s 1,000 square km exclusion zone, which is considered too dangerous for people to live in or farm, could be turned to solar, biogas and heat and power generation.”

To read The Guardian’s story, please hit this link: