The Russian Far East is in red.

Many Russians fear that their nation’s Far East could end up being absorbed by China, with its 1.4 billion people and huge economy.

So the Russian government, following the directive of  strongman President Vladimir Putin, is offering to give  land to  lure Russian settlers to the vast region. The nine Far Eastern regions covered by the program take up more than a third of Russia’s area but are home to only 6.1 million people, compared with the 110 million Chinese living across the border in  Manchuria.

Mr. Putin said in 2013 that the development of Siberia and the Far East must be “our national priority for the entire 21st Century.”

To read a New York Times piece on this, please hit this link.

Su Bin, a Chinese businessman who admitted being part of a group hacking  U.S. defense secrets, has been given nearly four years’ jail. He had been extradited from Canada.

Su Bin was convicted of taking part in a multi-year plot  by Chinese military officers to obtain sensitive U.S. military information, including projects including the F-22 and F-35 fighter jets and Boeing’s C-17 military transport aircraft.

“Su assisted the Chinese military hackers in their efforts to illegally access and steal designs for cutting-edge military aircraft that are indispensable to our national defense,” said John Carlin, assistant attorney general for national security.

The Chinese government has repeatedly denied any involvement in hacking.

But, The Guardian noted, his spying has been been openly lauded in China.

“We are willing to show our gratitude and respect for his service to our country,” said a March editorial in the Global Times, a nationalistic newspaper with close ties to the China’s Communist Party dictatorship.

“On the secret battlefield without gunpowder, China needs special agents to gather secrets from the U.S.”

Prosecutors said Su, who ran a China-based aviation and aerospace company from Canada, traveled to the United States at least 10 times between 2008 and 2014 and worked with two unidentified  China-based co-conspirators  to steal the data.

Su admitted taking part in the crime for financial gain.

To read The Guardian story, please hit this link. 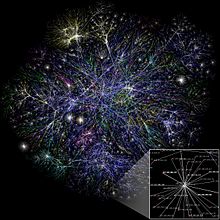 Visualization of some  routes on the Internet.

The Chinese government is imposing new regulations for online advertising that include a wide-range of practices from e-mail to videos. The increasingly authoritarian government is trying to impose more rigorous control of this part of the Internet, in this case, apparently, mostly for public-welfare concerns and not as part of the efforts of President Xi Jinping to tighten the political control of the huge nation by  the Communist Party dictatorship.

The Wall Street Journal reports: “The rules are China’s most comprehensive to date, broadly defining online and electronic advertising as including e-mail ads, paid search results, and embedded links, images or videos ‘with the purpose of promoting goods or services.”’

“The regulations, which take effect in September, lay out guidelines against false or misleading practices and prohibit online ads for prescription medication and tobacco while requiring prior government approval for ads for medical supplies, pesticides, veterinary medicine and other health products.”

Here’s a Wall Street Journal interview with  cyberspace expert Tim Maurer on the future of Chinese-U.S. cybersecurity relations and Beijing’s ambitions for managing the Internet.

He says data-stealing is his greatest fear for the Internet:

“The vast majority of hacking incidents so far have been relatively unsophisticated stealing of data, which is the low-hanging fruit. In most instances, that’s because defenses are so bad — including at the government level. But now you’re starting to see increasingly sophisticated malware, and there’s a concern about hackers not just stealing data, but altering it.”

As Chinese expansionism fuels fears all over East Asia, Japan plans to buy new fighter jets worth a total as much as $40 billion. Japan is increasingly worried about Chinese aggression in the East China Sea, where there are a number of islands whose ownership the two nations dispute. It’s also worried about Chinese militarization of the South China Sea, which could threaten freedom of navigation in some of the world’s most important shipping lanes.

The Japan Times reported: “The program will dwarf most recent fighter jet deals in value, likely attracting global contractor interest. But analysts say Japan’s preference for an aircraft that can operate closely with the U.S. military, given close Washington-Tokyo ties, makes a non-U.S. option a long shot.”

Japan seeks  a kind of warplane that will let it  maintain air superiority over China. China’s warplanes still lag behind those used by the U.S. and its allies, but Beijing has been building its capability,  fueling a more muscular security agenda under Japanese Prime Minister Shinzo Abe.

To read The Japan Times’s story on this, please hit this link.