(BGF) – The latest installment of the BGF Leader Series featured Robert Desimone, the Director of the McGovern Institute and Don Berkey Professor in the Department of Brain and Cognitive Sciences at MIT, and a member of the BGF Board of Thinkers. As a result of Professor Desimone’s work and the McGovern Institute’s accomplishments, the Boston Global Forum is going to recognize and honor the McGovern Institute’s research achievements and Edward M. Scolnick Prize in Neuroscience in the Boston Global Archive, and at a later stage the BGF will add it to the Boston Global Museum. Throughout his talk, which focused on the topic “unlocking the human brain”, Professor Desimone noted the important technological advances that are currently being made which are allowing for new breakthroughs in the field of neuroscience.

Given its extremely talented faculty, the McGovern Institute is well-placed to both drive advances the field of neuroscience, as well as ultimately translate those advances into beneficial treatments and therapies for patients suffering from brain disorders.

Looking back to his time at the National Institute for Mental Health (NIMH), Professor Desimone recalled having a realization that, despite the intelligence, dedication, and commitment of the clinicians and psychiatrists on staff, it was difficult for them to make any progress in developing new treatments for their patient population: “the sad fact was that the pipeline of new ideas – new drugs and so on – was really pretty dry”. It was at this point in his career that Professor Desimone became aware that it was essential to deepen our understanding of the fundamentals of how brains work if there was to be any progress in the development of new treatments.

It was also at this point that Professor Desimone happened to accept the offer to become the Director the McGovern Institute, an institute focused on understanding how the human brain functions and translating that knowledge into beneficial therapies and treatments for patients suffering with brain disorders. Additionally, in recent years, an array of new technological advances have driven the field of neuroscience forward. In particular, Professor Desimone mentioned three technological advances that have had particularly significant impacts on neuroscience research: the sequencing of the genetic code; advancements in brain imaging; and recent efforts at Stanford University to make the brains of animals transparent.

The effort to sequence the human genome was initially an extraordinarily large and expensive feat. However, in the years since the human genome was first successfully sequenced, the price of sequencing the genome has dropped so low that it is feasible to sequence an individual’s genome in order to identify genetic mutations. While direct links between genetic mutations and psychiatric disorders only exist in rare cases, being able to identify genetic mutations can play a crucial role in better understanding and recognizing genetic vulnerabilities that can lead to brain disorders. Moreover, a more in-depth knowledge of genetic vulnerabilities can help further deepen the understanding of how a genetic mutation can result in an abnormally functioning brain circuit that ultimately results in a brain disorder.

As for advances in brain imaging, the use of MRIs and the further developments in MRI technologies have greatly contributed to neuroscience research. MRI technology now allows researchers to image functional changes so that they can “track the activity patterns in the brain – at least on a coarse temporal time-scale – and you can actually see the brain at work as people solve problems, have emotions, understand situations, and so on, and its been applied now to many different patient groups to try and track down sources of abnormal neural circuits.”

Professor Desimone hopes that this technological advance will be merged with the advances in genome sequencing. He holds out hope that, if the advances in brain imaging and genome sequencing are combined, “We might be able to say that the vulnerability involves abnormal activity in certain particular brain circuits that we’ve identified in MRIs by imaging people that we’ve done this genotyping on. Once we’ve narrowed that down between the gene alteration and the abnormal activity in circuits, that is going to put us on the right path to new discoveries.”

Thirdly, researchers at Stanford University’s Karl Deisseroth Lab found a way to render the brains of animals transparent. This advance could make it easier for researchers to more accurately label and track the connections of neural circuits. As Professor Desimone noted: “People are just now gearing up to apply this new technology and human brain material from people who have died but have lived lives where they’ve suffered from schizophrenia, Alzheimer’s Disease, and so on and we will be able, with unprecedented ability, to track the abnormalities in this brain tissue from people who have died with disease.”

Professor Desimone also discussed the potential that neuroscience research could help us better understand cultural differences. As he noted, neuroscience research currently involves scientists working across the globe. Given the global scope of the research, it is possible that we may develop a deeper understanding of how the human brain functions in different cultures. This information could play a crucial role in helping to decipher cultural differences, minimize cultural misunderstandings, and facilitate greater cross-cultural understanding and collaboration.

The discoveries and advances Professor Desimone discussed during his BGF Leader Series lecture have all occurred recently, with some even occurring within the past year. Given the rapid pace of development in neuroscience it is likely that there will continue to be new and exciting discoveries about the fundamentals of the human brain for years to come, with exciting global implications. Although much uncertainty remains regarding the fundamentals of how the human brain functions, it is clear that the McGovern Institute will continue to lead the neuroscience research that will unlock the secrets of the human brain. 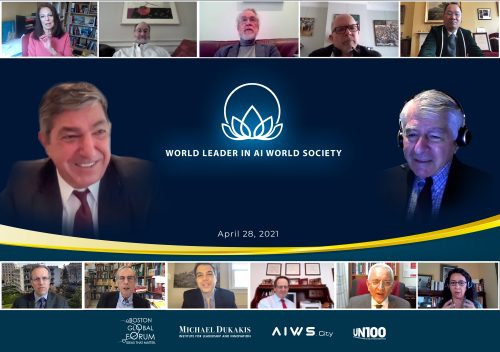