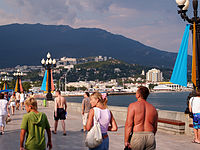 In the resort of Yalta, in Crimea.

In what mean more Russian military attacks against Ukraine, Russian President Vladimir Putin ordered naval war games in the Black Sea after he accused Ukraine of sending saboteurs into Crimea, which Russia seized from Ukraine in 2014.

Ukrainian and other observers fear that Russia may plan to ramp up fighting in the war between  Ukraine and pro-Russian and Russian armed separatists.

Reuters speculated: “Such an escalation could be used by Putin to demand better terms in the Ukraine peace process, or to inflame nationalist passions at home ahead of Russian parliamentary elections next month.”